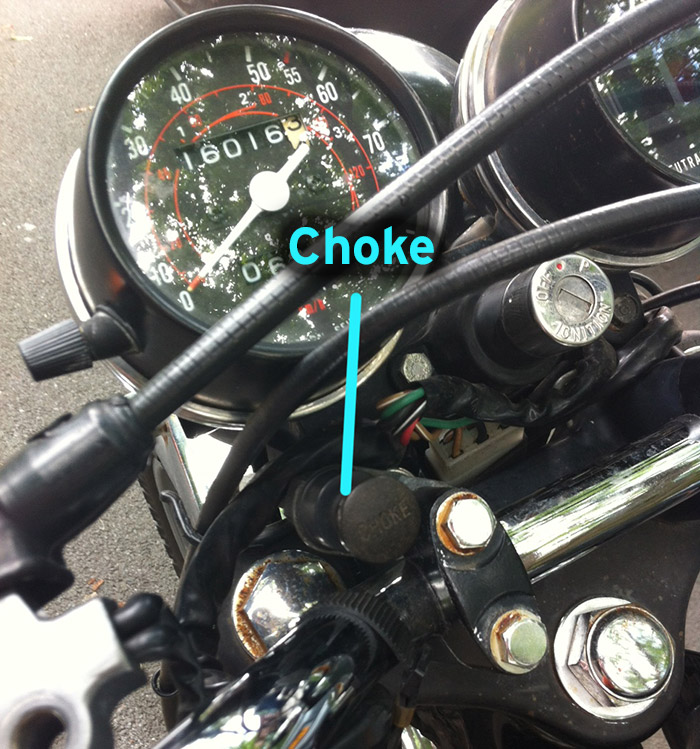 Driving a motorcycle properly involves using your arms, legs, five sense..and really every part of your body at once.

The handlebars are what you’re going to be holding onto, and in many ways they are the center of your controls. There are a number of controls on either of the handlebars:

Throttle: The throttle is controlled by twisting the right handgrip downward, this will increase engine rpms. To slow the engine down, simply twist back the handgrip. A spring mechanism will help the throttle move back to idle position when you twist off.

Front Brake: It is the lever found in front of the right handgrip.

Rear Brake Pedal: On the right side of the bike in front of the right foot peg, pressing down with your right foot will engage the rear brake.

Gear shifter: The gear shifter is on the left side in front of the foot peg and is changed using your left foot. Nestle your foot underneath the shifter and push upwards to move up to faster gears – and put your foot on top and press downwards to go down to slower gears.  Each time you press up or downwards you will get one movement and click, each of these click or actuations is a change of a single gear. So if I was in first and i eventually shifted to forth while accelerating – I would press push the gear shift upwards with my foot underneath 3 times. 1st to 2nd, 2nd to 3rd, and 3rd to 4th. Neutral (or no gear) is the space in between 1st and 2nd gear. It is a half click in between the two.

Sometimes it is difficult to get into neutral between 1st and 2nd. You have to use less pressure when moving into neutral so as only to move a half click between the two gears. remember you can always also just pull in the clutch if you need to stop and can’t find neutral with the shifter.

These other controls do differ slightly from model to model in terms of where they are placed. The motorcycle pictured above has the most common placement for all the controls.

Fuel Valve/Petcock: Lots of motorcycles have these, although some, mostly newer models, do not. Many motorcycles do no have fuel gauges like a car does to let the operator know how much gas is left. Instead you have a valve with three settings. On, off, and reserve. Turn the fuel line off if storing the motorcycle for a while, turn it on when you want to use the bike. When using the motorcycle and getting low on gas, you will notice a decrease in performance and sputtering etc – that’s when you turn the petcock to the “reserve” setting. This will give you another half gallon or so of gas and allow you to find a gas station.

In practice a lot of people estimate when they’re due for gas by reseting the trip odometer and keeping track of the miles traveled since last fill up. Depending on how many mpg (miles per gallon) your motorcycle gets and how much it holds, it gives you an idea when you need to fill up.

Ignition Switch: This is where the key goes : ) There are a couple positions you can have it in. Notably ON or OFF, which are pretty self explanatory. If you want to use the bike, turn it to the ON position, to remove the key turn it to the OFF position. Some bikes also have a “LOCK” position, which will engage a steering column lock and allow you to remove the key. Also some bikes have a “PARK” or “ACCESSORY” or similar setting that allows you to use the lights or other electrics on the bike.

Choke: The choke is often found around the handlebars or somewhere near the carburetors on the engine. On motorcycles with fuel injection, there may be no choke, or if there is, all it does is initiates a higher idle rpm to warm the bike up. A choke is used to start the motorcycle, giving it a fuel mixture richer in gasoline, which creates a higher idle that warms the engine up. When the engine is warm, you should turn the choke off so the bike receives the normal operating fuel mixture.

Kill Switch: This switch is usually on the right handlebar and allows you a quick way to turn the engine off. Make sure this switch is set to on whenever you want to run your motorcycle.

Turn Signal Switch: The turn signal is usually on the left hand side and actuated by using your thumb. Unlike on cars, most of the time the signal will have to be turned off manually after a turn. Some Motorcycles may have the turn signal on either side of the handlebars, so pressing the button on either side will turn on the signal in that direction.

Headlight Switch: Motorcycles have the headlight on at all times when running, in order to increase visibility. the headlight switch is usually on the left handlebar and switches between high and low beam settings.

Starter Button: Usually on the right handlebar, press this button to start the bike.

Speedometer and Tachometer: the speedo and tach are the same as in automobiles. Showing road speed and engine rpms. Many motorcycles omit tachometers.

Indicator Lights: Check your Motorcycle’s manual to see what the various indicator lights on your dashboard mean, but some of the more common indicators are neutral, turn signal indicators, oil pressure, and high beam.